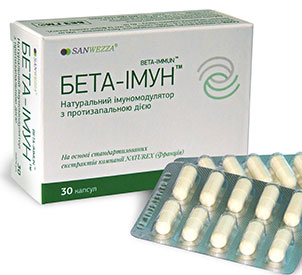 Environmental and socio-economic problems in Ukraine have led tosnowballing increase of various diseases among the population, including chronic – infectious, somatic and cancer. The action of ionizing radiation factors, massive and often excessive drug therapy (antibiotics, cytostatics, NSAIDs and other toxic drugs) also impair the immune system (secondary immunodeficiency), which promotes the development and adverse course of the most diseases. Of particular concern is a rise in the number of cancer diseases, which is associated with the accumulation all increasingly carcinogenic containing substances in environment as well as with decrease the body’s immunological defense of the general population.

Unfortunately, more than a third of cancer patients dying in Ukraine already within 1 year after diagnosis due to late diagnosis of the disease and the inability to carry out its full course of therapy. And those who carried out the treatment, antitumor chemotherapy and radiation therapy have an additional suppressive effect on the cells of the immune system and blood.

Numerous researches have convincingly shown that immune dysfunction have a significant impact on the effectiveness of treatment and prognosis. Its therefore logical is the inclusion in the scheme of treatment of inflammatory, infectious and oncological diseases of modern drugs for correction of immunity disorders, which are called immunomodulators.

Drugs of biological (natural) origin which are not only effective but safe for human body have become more common among immunomodulators. Beta-Immun –  natural immunomodulator with anti-inflammatory action based on beta-glucan, produced from a standardized raw material of NATUREX (France). Selenium and skin extract of black walnut complement the action of beta-glucan, causing more powerful immunotrophic impact.

Beta-Immun –  is an innovative product developed by our scientists in collaboration with Austrian experts have shown high efficiency. This original product, unlike existing in Europe preparations of beta-glucan, has a new improved composition of immunotrophic substance that causes a powerful impact on all parts of the immune system (cell-mediated and humoral immunity), while effectively reduces the severity of inflammation. Given these properties, Beta-Immun is recommended in the complex therapy of acute and chronic inflammatory and infectious diseases, and cancer pathology.

Discovery a group of beta-glucans – effective immunomodulatory agents about 30 years ago became a very important event in modern medicine. This group of natural active substances with a minimum of side-effects has been widely used in medical practice all over the world to treat various diseases requiring immunomodulation. Today, beta-glucans play the same important role in immunology, as at time penicillin in the world of antibiotics.

International researches of immunomodulatory activity of beta-glucans had also proved effective for the treatment and prevention of many diseases that require correction of the immune system. Beta-Immun helps to restore independently the body’s immune defenses and maintain health, makes possible to mobilize the body and to increase its adaptive capacity and quality of life.