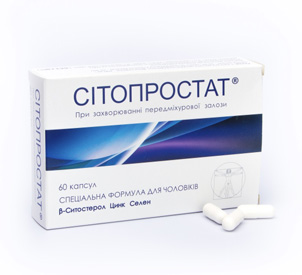 Sitoprostat is an additional source of the phytosterols, zinc and selenium for men in the risk group, with a prostate disease in their medical history (prostatitis, adenoma).

The original combination of β-Sitosterol, zinc and selenium, reinforcing each other’s action, provides a complex effect on a man’s organism:

– prevents the development of BPH and has an anti-inflammatory effect

— decreases the level of cholesterol and β-lipoprotein in blood

— is involved in the synthesis of prostaglandins

— is required to maintain an optimum level of testosterone

— prevents the development of the proliferous processes in the prostate gland

— has an immunomodulating action

The main active ingredient of the product Sitoprostat is β-Sitosterol which refers to a group of phytosterols that were discovered in 1922. Phytosterols are a large group of plant substances (about 100 combinations) that are similar in their chemical structure to an animal product — cholesterol, and constitute a part of the plant cell membrane. The most important phytosterols are β-Sitosterol, Campesterol, Stigmasterol.

Phytosterols produce a positive effect on the prostate disease process due to lowering the level of pro-inflammatory cytokines that results in a reduction of the prostate size, improves urination and decreases residual urine volume. β-Sitosterol is a noncompetitive inhibitor of a 5-alpha-reductase — an enzyme involved in the reaction connected with the conversion of a testosterone to a dihydrotestosterone. β-Sitosterol complicates the dihydrotestosterone binding to the specific receptors and accelerates its dissociation that causes an anti-androgenic effect. β-Sitosterol has also the immunomodulatory and antitumor properties.

Due to the similarity of the structure of phytosterols to cholesterol, they are easily connected and have the ability to block the specific receptors that leads to a reduction in a cholesterol binding, absorption and excretion from the body. According to some reports, the plant sterols administration reduces the concentration of cholesterol in the human body by more than 15 %. Thus, getting into the gastrointestinal tract of a human, phytosterols interfere with the absorption of the exogenous cholesterol, received from food and the endogenous cholesterol, which passed into the intestine with the bile. Therefore, when using phytosterols a total cholesterol and low-density lipoproteins level reduces in blood (“bad” cholesterol), and a regular consumption of foods rich in phytosterols may suspend the development of the atherosclerotic process.

Numerous clinical studies conducted over 45 years in different countries have confirmed the safety of phytosterols.

β-Sitosterol — the main ingredient of Sitoprostat — produces a positive effect on the development of BPH that is proved by a lot of scientific studies. The randomized placebo-controlled clinical studies in the research centers of the USA and Germany, involving 1,000 men at the age of 65, showed the high efficacy of β-Sitosterol: patients showed a significant reduction in severity of BPH symptoms, in addition, the beneficial effect was quite constant – up to 48 weeks.

Zinc and Selenium which are also the constituents of Sitoprostat supplement and enhance the effect of β-Sitosterol, which contributes to the rapid achievement of a positive effect in the prostate diseases. Zinc plays an important role in the development of the reproductive organs and prostate function, maintains the sufficient level of a sex hormone. Selenium stimulates the antibody formation, thereby, increases the body’s defense against infectious diseases and contributes to maintaining and extension of a sexual activity.

The product Sitoprostat is produced on the basis of the standard high-quality phytosterols manufactured by BASF Corporation (Germany) with a high in content of β-Sitosterol – 80 % that constitutes its competitive advantage. In other competitive products there mainly plant extracts are used with a small amount of β-Sitosterol, for instance, in products with Palmetto extract it is 300 times less. The product Sitoprostat is produced at a pharmaceutical facility in accordance with the international ISO and GMP standards.

The product is recommended for use as a dietary supplement to food ration of the men with prostatitis, prostatic adenoma and age-related changes of the prostate in order to normalize the urinary and reproductive system functionality, in particular the reproductive function, as well as for normalization of a lipid metabolism and to reduce the risk of a cardiovascular disease. Especially significant for the senior men with the age-related pathological changes in the prostate.