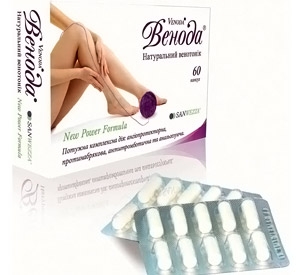 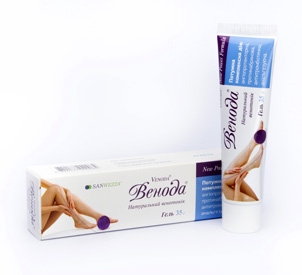 According to WHO the vein varicose of the lower extremities affects about half of all women over 40 years and about 25% of men and about 60% of the adult population in the developed countries have a predisposition to varicose disease.

Venous disease is for a long time hidden and has no symptoms at the early stages. Today there are no analogues of the venotonic medicinal product in the Ukrainian pharmaceutical market. The innovation of the Austrian company Sanwezza Lab GmbH is that they created a powerful new formula – «three in one», they combined in a single product the active components of two major groups of venotonics. The product Venoda includes the seed extract of Horse Chestnut (with a high concentration of escin), Diosmin and Hesperidin, which enhance and complement each other’s action”.

The specific feature of the natural venotonic Venoda is a rapid start and long-term effect. Escin asa  part of the product rapidly enters the bloodstream reaching the maximum concentration in the first hours after administration. Effect of Diosmin and Hesperidin develops gradually but lasts much longer. Thus, the effect of Venoda starts from the very first hours and lasts more than a day!

With the combination of three of the most effective natural venotropic substances the developers provided the consumer with a new and original product, which has more powerful and complex effect on the venous system in comparison with other venotonics. The unique combination of escin, diosmin and hesperidin causes venotonic, angioprotective, decongestant, antiplatelet and analgesic action. Thus, Venoda affects almost all chains in the development of the venous disease.

The convenience of administration and economic efficiency of Venoda are also obvious: it is advisable to buy one package of the product, «three in one» than two packages of different types of drugs – containing escin and diosmin with hesperidin.

The product with a unique composition of three venotropic substances produces a powerful therapeutic effect in vein diseases and prevents severe complications.